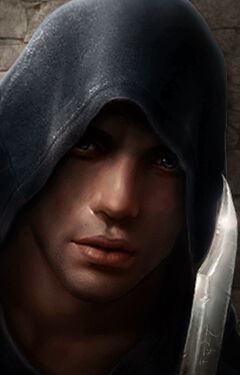 Often seen wearing a cowl over his head, the weathered piece of clothing is seldom used to shroud his features in shadow.


The youthful figure underneath is clearly of Damaran descent, being in possession of dark hair with contrasting pale blue irides. He stands at an average height, owning a wiry build that is not overly impressive. Every once in a while an infectious smile brightens his expression, masking the years of hardship that his rough hands illustrate.


His words carry an accent that resembles Easting, the way it is spoken in the Vast.

· As both adventurer and mage, he is struck by wanderlust
· Has a strong aversion to (half-)orcs, trolls and goblinoids
· Has a dislike for Ravenians (The people of Ravens Bluff)
· His magic is best described as dark, strange and deceptive
· Is rather fascinated by tales of giants and giant slaying
· Is unphased by filth or horrible smells, being from Calaunt
· Likes to spectate or join drunken brawls, no matter the odds
· Possesses a slight fear of dark water or water in the dark
· Received no formal education, though he is not illiterate
· Would go to incredible lengths to take care of his family

Retrieved from "https://easting.fandom.com/wiki/Lev_Balakov?oldid=8148"
Community content is available under CC-BY-SA unless otherwise noted.